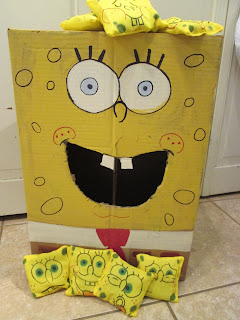 For my birthday this year (back in May) my daughter told my mom that I would like a Spongebob Squarepants birthday cake. Well, she was right! In fact, I decided to make my whole birthday dinner into a Spongebob affair and we created our own Spongebob Squarepants Bean Bag Toss Game! I usually make a bean bag toss each October for Molly's Annual Halloween Party, too. Here's how we made one for Spongebob:


We started with an empty cardboard box and I used an old steak knife to cut out a large mouth-shaped hole. Then we painted the whole box to look like Spongebob using tempera paint. This was a fun part of the project for Molly (5) to help with! I added details with black permanent markers.

While that was drying, we got to work on the bean bags. I cut several 5" squares from yellow fabric. You can use a single yellow fat quarter from Wal-Mart for this and it costs maybe $1.25! I searched for "Spongebob faces" images on www.dogpile.com and found exactly what I was looking for here! Using these Spongebob pictures as a guide, I used colored permanent markers to make a different face on each of six yellow squares.

For the inside of our beanbags, I bought a couple bags of dry beans from the grocery store. Molly (5) helped me fill six sandwich bags with about 3/4 cup of the beans in each and seal them up.  Fold each bag in half, then in half again so it's the right size. I  used blue painters tape to hold the folded edge down (just because it was the closest tape at the time...any kind will do!). 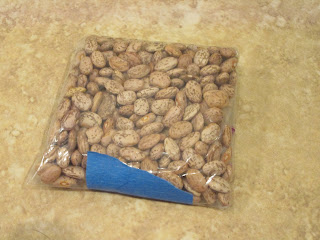 Molly also helped me sew the beanbags on my sewing machine! Place two yellow squares together: one plain and one with a face on it. Be sure the face is upside down! 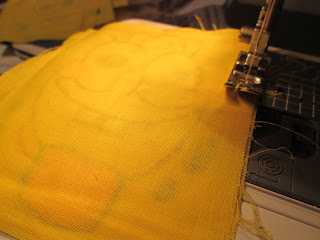 Sew around three complete edges, and part of another edge. Leave that hole open so you can turn it right-side-out. Then put the plastic baggie filled with beans inside your semi-sewn bean bag. Finally, fold the open edges in a little and sew it closed. That way you won't have any rough edges poking out. You can also sew this part by hand.  Be careful not to sew the plastic bag inside so you don't mess up your sewing needle. I love the facial expression in the one below - Spongebob looks pretty nervous to have that needle so close to his head! lol 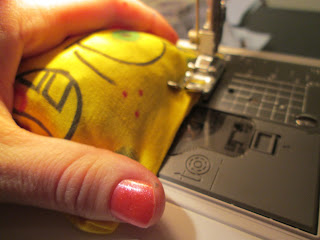 The kids enjoyed playing our Spongebob Squarepants Bean Bag Toss game at my impromptu birthday party last month... and it's still in our living room being played with today so it's held up great! Mostly though, I loved making it with my little girl!
Posted by "Sara" at 1:21 PM